Casualty numbers vary after clash with PJAK in Kamyaran

The Revolutionary Guards in Kurdistan report that five Basij members were killed in Kamyaran in conflict with the Kurdish group PJAK; however, PJAK maintains that the number of dead was higher. 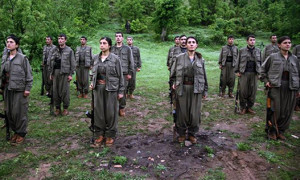 IRNA reports that Ebrahim Hosseini, the coordinating officer of the Beytol-Moqadas Guards, said that five Basij members, all local recruits, were killed in an armed conflict on the night of Tuesday August 11.

He went on to add that the PJAK operation was in response to an earlier attack in which Revolutionary Guards took control of their base in the country’s northwest border regions.

The Forat News website linked to PJAK also posted a report on the attack, quoting knowledgeable sources saying that 70 members of the Revolutionary Guards were involved in the attack and many of them were killed.

The report adds that Iranian state media do not report the actual number of fatalities. It goes on to say that several of the officers killed in the attack were not from Kamyaran.

The five Basij members were to be laid to rest today, Wednesday August 12, in Kamyaran.