The National Iranian Oil Company says it will not increase oil production until international sanctions are removed. 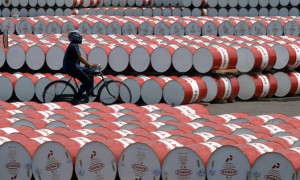 The Oil and Energy website reports that company director Rokneddin Javadi said any increase in oil production is conditional on the lifting of sanctions.

“Our assessment indicates that we can increase our oil production to the extent of the lost market [share]; however, we believe that in the short term, that is, in the one or two months following the elimination of sanctions, the oil market will not be able to absorb any more than 500,000 to 600,000 barrels a day and we are able to increase our production to that rate in less than a month,” Javadi explained.

He estimated that it will take anywhere from six months to a year for Iran to regain the share of the international petroleum market it had captured prior to the sanctions regime.

He said Iran used to produce about four million oil barrels a day prior to the sanctions.