Sand storms in Sistan take a toll on daily life

All government offices and businesses were closed due to the heavy sand storms in Sistan on Sunday August 9. 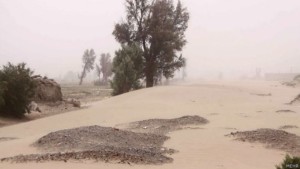 The Mehr News Agency reports that on Sunday August 9, heavy winds raised the concentration of airborne dust particles to over 34 times the acceptable level.

The Zabol representative in Parliament addressed the head of the Department of the Environment, saying Lake Hamoon has been dried out for over 18 years and “dust and sand from it have been drying out the lungs of the people of Sistan Province”.

One hundred and twenty days of monsoon winds coupled with years of drought have exacerbated the problem of dust particles in Sistan-Baluchistan.