In an audio file, ISIS has announced that it will continue suicide attacks inside Saudi Arabia.
The Associated Press reports that ISIS forces issued an audio file on Saturday along with a photograph of the suicide attacker who struck at a Saudi mosque, warning “the leaders of Saudi Arabia” against cooperation with the US-led coalition against ISIS. 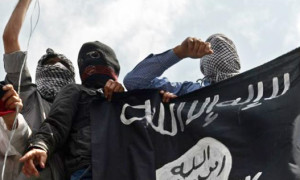 ISIS claims that the photo, published on a Twitter account, is of Abu Senan Alnajdi and that he was the man who attacked the mosque in Abha. The voice on the audio message vows that “Saudi Arabia will not see peace” and it calls on ISIS militia to take action, reminding them that “an explosives belt is more effective than firearms”.

At least 14 people were killed in the suicide attack on the Abha mosque on August 6, and the victims were reportedly members of the Special Royal Security Forces.

Another ISIS suicide attack in May at a Shia mosque in eastern Saudi Arabia killed another 21 people.

Obama sees potential co-operation with Iran in wake of deal