The Iranian consulate in the Turkish city of Erzerum has warned Iranians to avoid travelling to Turkey by land. 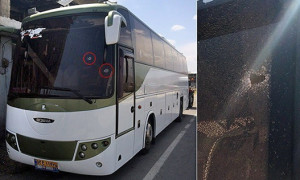 Khabaronline reports that Iranian Consul Hossein Ghassemi said the increase in terrorist activities on border routes in Turkey means Iranians should avoid unnecessary trips to Turkey by land and use air travel instead.

He added that in case they choose land routes, they should only use the Bazargan border and travel during the day.

The news comes after a passenger bus was attacked by armed assailants on Friday August 7, leaving two people dead and four injured.

The Anatoli News Agency reported that an Iranian national and a Turkish soldier were killed in the attack. The injured were reportedly transferred to a hospital in Van.
While no group has claimed responsibility for the attack, Turkish authorities have attributed it to PKK Kurdish forces.

The Turkish government has begun widespread attacks and arrests against the PKK, the military branch of Kurdistan’s Workers Party.

Advocate calls for aid for blind woman hurt in fall