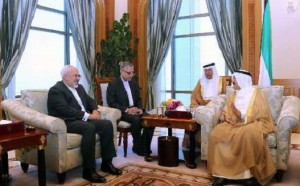 The visit reportedly aimed at discussions regarding regional issues and in his meeting with Shiekh Sabah al-Khaled, Mohammad Javad Zarif stressed Iran’s priority in foreign policy is development of cooperation and friendly relations with its neighbours.

“Despite unfair treatment by some countries, we have never taken any steps against our neighbours,”Zarif was quoted as saying.

Kuwait News Agency reports that Iranian foreign minister said the first aim of his trip was to stress “the transparent objectives of Iran’s nuclear program”.

Kuwait is the first neighbouring country to which Iranian foreign minister has travelled to since the announcement of the nuclear agreement between Iran and the world powers in Vienna.

Zarif will continue his visits to the neighbouring countries with trips to Qatar and Iraq after his stay in Kuwait.

New court to preside over disputes about water resources