North Korea says it is not interested in engaging in Iran-style nuclear negotiations with the United States and it does not seek any nuclear agreement with Washington. 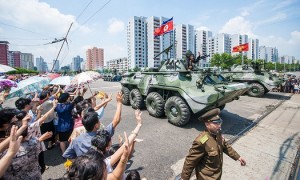 In a statement issued on July 21, North Korea states that its nuclear program is an “essential deterrence” against the “provocative” foreign policies of the United States.

The statement goes on to say: “It is not logical to compare our situation with the Iranian nuclear agreement because we are always subjected to provocative U.S. military hostilities, including massive joint military exercises and a grave nuclear threat.”

Iran and the 5+1 reached a deal last week to limit Iran’s nuclear program and maintain it under complete IAEA supervision in exchange for the removal of international sanctions against the country.

The North Korean statement says: “We do not have any interest at all in dialogue for unilaterally freezing or giving up our nukes.”

North Korea has carried out three successful nuclear tests in 2006, 2009 and 2013 respectively and announced that it has sufficient plutonium for the production of six weapons-grade atomic bombs.

North Korea is under heavy U.S., EU and United Nations sanctions for its nuclear program.

Iran has consistently maintained throughout the negotiations that it is not interested in the production of nuclear weapons and all its nuclear activities are peaceful.