At least 100 people were reportedly killed in the Port of Adan in Southern Yemen on Monday July 20. 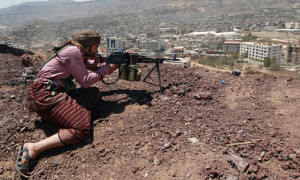 The head of one of the international aid organizations in Yemen has called this one of the worst days for killings.

The recent rise in clashes followed repeated losses by Houthis in the capital and the return to Adan of senior officials from the government of exiled President Hadi.

Doctors Without Borders also reports that today’s clashes left more than 200 people injured, adding that 80 percent of the wounded are civilians, and that even includes pregnant women.

A spokesman for President Hadi in Riyadh announced on Friday July 17 that Yemeni forces backed by Saudi air strikes had regained control of the Port of Adan.

The return of President Hadi’s aides and ministers has been described as the prelude for the return of the exiled president.