Heavy torrential rains have flooded Chaloos and Haraz roads in Tehran and Alborz Provinces so far killing 35 people. Fifty vehicles are also reportedly missing in the Asara region of the two mountainous roads. 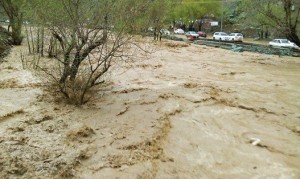 Meanwhile five villages have been trapped by floods and another six were killed in Sijan from the floods.

IRNA reports that Karaj River has flooded overrunning Chaloos Road and all access to Sijan has been completely lost while the town also remains without power.

Alborz governor reports that floods have severely restricted access to many of the villages and townships along the road.

Meanwhile Tehran was hit with severe winds and storm since Sunday July 19.

Mudslides in Emamzadeh Davood blocked the road leaving 2,500 cars stranded and emergency workers have finally managed to only open a small opening in the road to allow for a slow passage of the cars.

The storm winds in the capital according to Tehran Emergency Services reached up to 79 km/h and with over 40 accidents reported as a result of the heavy winds and rains, all emergency services are engaged or on alert.

Tehran governor said last night that the floods in in the region have been unprecedented in the past 40 years but added that they have managed to get through the critical period for now.