Heavy rains in Saqez and Baneh and several other Kurdistan cities caused flooding on Saturday July 18. 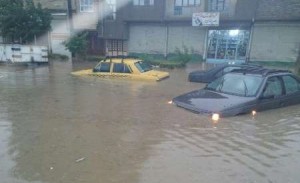 IRNA reports that the summer flooding caused serious damage to the bazaar and many homes in Saqez.

The Saqez governor said approximately 20 percent of the city downstream passes sustained damage and the historic bazaar has also been seriously damaged.

The Red Crescent reports that the Revolutionary Guards as well as the army and all of the city’s firefighters are hard at work providing rescue operations.

Water logging in the region often leads to floods after severe summer rains.