A group of Yemeni ministers in President Hadi’s government returned to Yemen on Thursday July 16 to make preparations to reestablish the exiled president’s administration, after Houthis were pushed back in Aden with the support of Saudi air strikes. 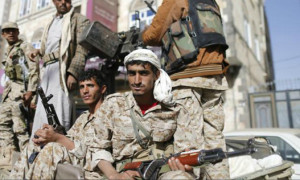 The senior government officials were flown to Aden in Saudi planes. The recent advances by Hadi’s supporters in Yemen came during the UN-brokered ceasefire that lasts until July 17, the end of the Muslim month of Ramadan.

Reuters quoted an official saying : “(Exiled president) Abd-Rabbu Mansour Hadi delegated this group to return to Aden to work to prepare the security situation and ensure stability ahead of a revival of the institutions of state in Aden.” President Hadi has been in exile in Riyadh since Houthis took over the capital in March.

Yemen Military reports that forces loyal to President Hadi managed to take large sections of the strategic city of Aden on Wednesday July 15, aided by Saudi air strikes.
At least 12 civilians were killed during clashes in Aden yesterday and more than 105 people were injured.