Nuclear talks end at last with a solid agreement

Iran and the 5+1 finally announced on Tuesday July 14 the finalization of an agreement after marathon negotiations in Vienna. 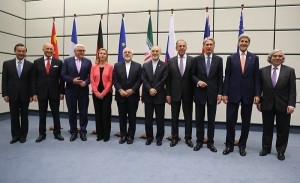 Mogherini announced that Iran has confirmed that under no circumstances will it pursue nuclear weapons, and in exchange all UN sanctions against Iran will be dropped. She said the deal ensures that Iran’s nuclear activities “will be exclusively peaceful”, adding that it represents “a shared commitment to peace and to join our hands to make our world safer”.

U.S. President Barack Obama has announced that he will veto any attempt by Congress to interrupt the agreement, adding that the deal is vital for peace in the Middle East.

Iranian President Hassan Rohani said in speech that trust-building will begin with the execution of this deal. He added: “As the deal is implemented step by step, we can slowly start removing the wall of distrust brick by brick.”