Iran’s Border Commander reports that a “terrorist cell” trying to enter the country through the Mirjaveh checkpoint in Sistan-Baluchistan was arrested on Friday July 10. 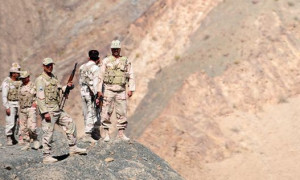 The Fars News Agency reports that according to Commander Ghassem Rezai, Iranian officials confiscated “weapons, ammunition, various forms of detonators as well as drugs” carried by the detainees.

The report adds that the arrest came after a two-hour confrontation with the group that left one of the detainees injured.

The border forces maintain that the detainees have confessed that they had plans to carry out terrorist operations in Sistan-Baluchistan, Kerman and other neighbouring provinces.

Ghassem Rezai did not give any further details about the identity of the detainees but said: “We have identified 70 bandit groups in Pakistan and announced their location to Pakistani officials.”

Mirjaveh is a small town 75 kilometres from the provincial capital Zahedan and its customs is the only legal spot in southeastern Iran for travellers and merchants to enter the country.

Iran’s border with Pakistan has been the scene of several deadly conflicts in recent years, and Iranian authorities have often accused Pakistani authorities of lax border control.