Western plane manufacturers are anticipating contracts with Iran worth billions of dollars as soon as sanctions against the country are lifted as a result of the nuclear negotiations. 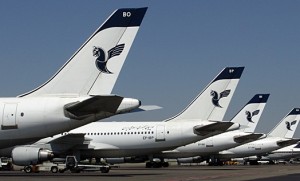 The ongoing nuclear talks have been extended as the parties try to hammer out a deal to end the 12-year dispute over Iran’s nuclear activities.

Iran’s air fleet has planes averaging 23 years in age, which is almost twice the international average.

Reuters reports that this could mean deals reaching $20 billion for manufacturers like Airbus and Boeing.

Maximo Gainza, a senior consultant at UK-based fleet watcher Ascend Flightglobal, told Reuters that many aircraft in Iran’s fleet are at the end their lives and “Iran is going to be a very hot market as and when sanctions are lifted.”

The report also quotes Iran Air chairman Farhad Parvaresh saying that Iran would be interested in purchasing at least 100 wide-body and short-haul jets.