According to ILNA, labour activists report that on Thursday July 2, workers from a number of Asalouyeh oil and gas development projects have gone into their fourth day of strike to protest the non-payment of wages. 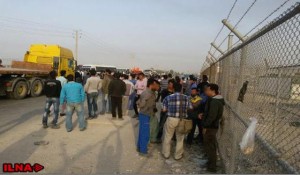 It’s the fourth day that contract workers in the phase 15 and 16 projects in Asalouyeh, who number about 800, have refused to continue work.

The workers have remained in their dorms or staged sit-ins in front of the employer’s offices, demanding to be paid.

The workers say the employer owes back pay from last year as well as the current year.

Workers are also protesting new contracts that they say are aimed at preventing them from making complaints. The new contracts reportedly contains provisions for management to terminate workers without pay if they take part in labour strikes.