An Iranian border officer was killed by “armed smugglers” in the border regions of Saravan, the Sistan Baluchistan Border Commander reported on Monday June 29. 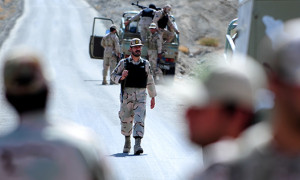 Rahambakhsh Habibi added that the smugglers were identified while transporting drugs into the country.

Three days ago, the militant Sunni group Jeysh-ol-Adl claimed it had “killed 16 Iranian Revolutionary Guards” in the course of two separate operations. The news was not confirmed by the IRGC.

Habibi’s report from Monday indicates that Officer Eshagh Siyasar Moghaddam was killed in a clash with a “drug-smuggling gang” as it was bringing narcotics into the country.

Habibi said the gang left behind “one ton and 670 kg of drugs” when they were confronted by border forces and escaped into the mountains.

Saravan, near the Pakistani border, has been the scene of several armed and deadly attacks in recent years.