The head of the task force for replenishing Lake Urmia say residents of villages around the lake and even as far as Tabriz have been breathing salt-laden air, causing a rise in blood pressure among the general population. 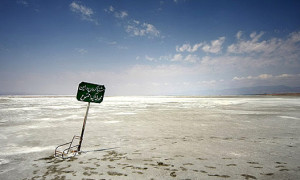 ISNA reports that the increased volume of particles in the air is posing a grave danger to the people’s health.

Armin Norbakhsh indicated there have not been any conclusive studies on the effects of the drying of the lake on the health of the people living in the vicinity. He said, however, that the increase in eye problems and blood pressure is undoubtedly related to the rapid disappearance of Lake Urmia.

Large-scale exploitation of the waters feeding Lake Urmia, Iran’s largest inland lake, has led to the rapid deterioration of the lake and the loss of most of the lake surface.

The depleted area is now a lake of salt that strong winds have been spreading through the region.

The government has established a task force to help the lake recover from its decline but so far no significant action has been taken.

Norbakhsh also reported a 30-percent increase in the incidence of skin cancer among people and wildlife in the region.