After attacks on Shias in Tunisia and France, a Shia mosque in Kuwait was the target of a bomb attack by extremists linked to the Islamic State of Iraq and Syria. 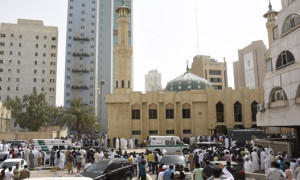 Reuters reports that Kuwaiti officials first put the fatalities at 13 but now a number closer to 25 is being reported after more bodies were pulled from the debris.

A Kuwaiti MO told reporters that Imam Sadegh Mosque was highly crowded on the second Friday Mass prayers of Ramadan. The perpetrator was reportedly among the worshippers when he detonated the bomb, which caused the roof and walls to cave in.

Eyewitnesses say the bomber was a young man not yet 30 years old.

ISIS has referred to the Shia mosque as the “temple of heretics”. This is the first attack on a Shia mosque in Kuwait.

In recent weeks, ISIS has carried out similar bomb attached on Shia mosques in Yemen and Saudi Arabia. In Iraq as well, ISIS regularly attacks Shia mosques and neighbourhoods.

One third of Kuwait’s 1.3 million population is Shia.