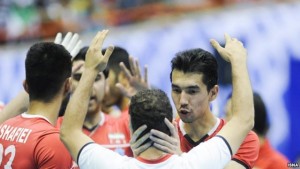 With its latest victory, Iran now has 15 points, while Poland maintained its second-place ranking with 17 points. The U.S. sits at the top of the chart with 20 points following a victory over Russia.

Iran won the first set, conceded the next two, and finally got the upper hand in the last two sets. This gave Iran two points for the match and Poland one point.

The captain of the Iranian team, Saeed Marouf, cited support from the spectators as a strong motivator for the team to get back in the game and win the last two sets.