Reactors for Iran said to be part of draft nuclear deal

The world powers have reportedly offered high-tech reactors to Tehran as part of the nuclear agreement being drafted at the nuclear talks in Vienna. 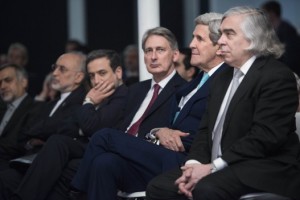 The Associated Press reports that it has obtained a draft of the agreement being worked on, and based on the document, the parties are behind schedule to meet the June 30 deadline for finalizing the agreement.

The report adds that the document includes several brackets which indicate contentious issues not yet resolved.

The world powers are reportedly offering light-water nuclear reactors instead of the heavy-water reactor in Arak. Western powers maintain that the Arak reactor could produce sufficient plutonium within a year to make several bombs.

Iran’s Supreme Leader said on Wednesday June 24 that inspection of the country’s military facilities and interviews with Iranian figures will not be accepted.

He also said that Iran would not accept any long-term restriction on the country’s nuclear program.