Iran’s Ministry of Youth Affairs and Sports warns that only about 20 percent of Iranians incorporate exercise and sports activities in their daily lives. 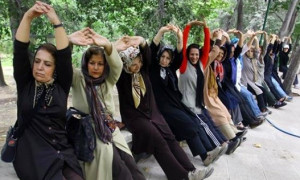 IRNA reports that a ministry spokesman expressed concern regarding the small percentage of the population engaging in daily exercise, saying that in most countries, at least 60 percent of the population have exercise as part of their daily routine.

Abdolhamid Ahmadi told IRNA that more men than women make up the 20 percent of Iranians who are physically active.