The head of the Hormozgan Coastguard says a five-kilometre pipeline for contraband fuel has been discovered in Minab. 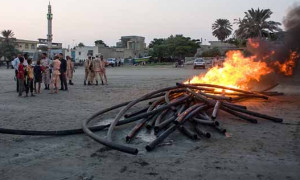 IRNA reported on Wednesday June 10 that according to an announcement by Colonel Ahmad Dadsetani, smugglers have been using the hidden pipeline to transfer fuel to various watercraft.

The report adds that smuggling fuel through secret pipelines is a common crime in Hormozgan and provincial authorities have discovered 21 kilometres of illegal pipeline in the past year.

Authorities across Iran retrieved 70 million litres of contraband fuel last year, and 41 percent of that was in Hormozgan province.

In recent years, with the end of government subsidies and an increased gas price, contraband fuel has become a lucrative business.