Storm winds reaching up to 115 kilometres per hour have forced residents in Sistan-Baluchistan Province to stay in their homes due to high volumes of dust and particles in the air. 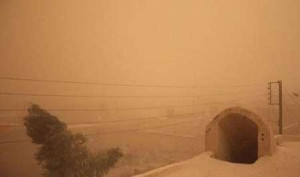 Molashahi added that visibility is seriously affected in these cities and today it was only 50 metres.

Meteorological reports indicate there is a chance that the winds will subside by tomorrow.

Sixteen years of drought in the Sistan-Baluchistan region and seasonal winds that now last 180 days per year instead of 120, have aggravated the problem of dust storms in the region.