The water crisis in Kermanshah Province is taking a serious toll on farmers as a number of towns deal with repeated interruptions in the water supply. 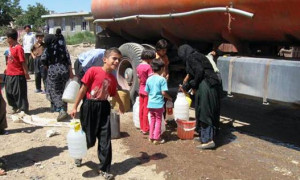 Most agriculture in Kermanshah is fed by rain, and ILNA reports that much of the sector has been seriously affected by the decline in rainfall, with farmers facing tremendous stress.

According to climatology reports, rainfall in the past year has fallen by 30 percent in Kermanshah Province and by 46 percent in the city of Kermanshah.

Water usage in the larger cities has led to the water supply being cut off for hours each day.
The report adds that many villages now depend on tankers for their regular water supply, which is very expensive for the province.

Iran’s power minister had warned that many provinces will face water shortages and drought in this calendar year.