Reports from Fars Province indicate that forest fires have destroyed 110 hectares of trees, including the 800-year-old trees of Miyanjangal. 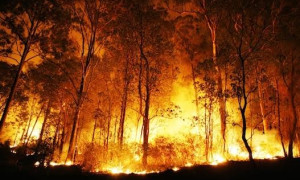 He added that the fire was probably caused by the negligence of a shepherd and authorities are investigating.

Last year, another 15 hectares of Miyanjangal, which is the habitat of many unique wildlife species, fell victim to forest fires.

Miyanjangal is covered by 50 hectares of forest and parts of it are protected.

The department of the environment has called on the government to invest in an overhaul of its fire-fighting capacity, which is currently minimal.