Penetration of satellite programs likened to American invasion
Iran’s Association of Psychologists reports that over 90 percent of Iranians now watch satellite programming, which includes both secular and religious families. 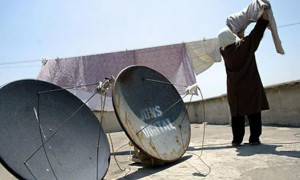 Association member Azim Darayi told ISNA that by virtue of satellite programming, “America has army forces” inside every Iranian household.

Darayi said the influence of these programs has even been seen in preschool-age children who would not accept a schoolbag bearing an Iranian character.

The legal ban on satellites in Iran is widely disregarded. Darayi said people are more inclined toward satellite programs because domestic media productions are weak.