River in Lorestan site of yet another fuel oil spill

Thousands of litres of fuel oil have spilled into the Kashkan River in Lorestan in the last three days after fuel carriers overturned during transport. 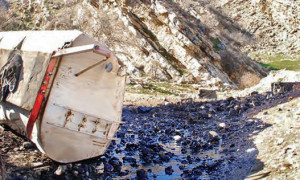 Twenty-four-thousand litres of oil have leaked from the tankers and spilled into the Kashkan River.

The Shahrvand daily reports that the head of Lorestan’s Environment Department has written to the capital calling for a national response to the disaster.

Mehrdad Fathi told Shahrvand that they have managed to create a dam to contain the oil, which they are now trying to collect.

Lorestan is on a route used by many oil transport tankers and it often has to deal with oil spills polluting the environment.

The spill usually gets into the Kashkan River, which in turn pours it into the Simreh and Karkheh Rivers, further spreading the pollution.

Two of the detained opposition leaders have eye surgery