An Iranian ship carrying humanitarian aid has unloaded its cargo in Djibouti, allowing the United Nations to deliver the goods to Yemen. 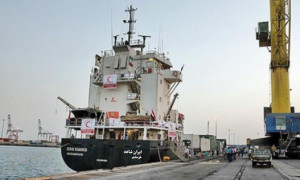 The Fars News Agency reports that the cargo was unloaded in the presence of UN representatives.

According to the reports, a 2,500-ton shipment of food and medical aid was delivered to the United Nations and will be sent to Yemen on another ship.

The Iranian ship began its trip on May 11 and was supposed to unload its cargo in Hadida.

However, in response to allegations by Saudi Arabia that Iran might be delivering weapons to Yemen, the ship headed to Djibouti to hand over its cargo to UN representatives.

Yemen is being bombed by a Saudi-led coalition, while Yemeni president Mansour Hadi has taken refuge in Riyadh and his Houthi opponents have taken control of large sections of the country.

Iran has condemned foreign intervention in Yemen and has called for all-inclusive negotiations to resolve the conflict.