“Hooligans” and other young offenders arrested in Tehran sweep

Tehran police force reports that they have arrested more than 100 people in the past 24 hours in a widespread operation to arrest young offenders in the capital. 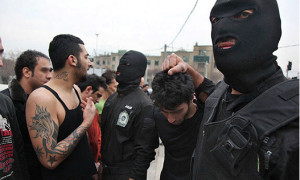 ISNA reports that senior police office Commander Qader Karimi said on Wednesday May 20: “In an operation at the level of three police precincts, 104 hooligans, thugs and sexual offenders” were arrested.

The operation covered areas in the southern and eastern sections of the capital.

The police chief said 60 of the detainees were “hooligans with various levels of offence” and the rest were “sexual offenders” mostly arrested around girl schools and their average age is under 20.

“Sexual harassment, inducing fear and intimidation, violating citizens’ sense of security, vandalism and consumption of alcohol” were among the charges brought against the detainees, according to Commander Qaderi.

He added that this is the second phase of an operation to “confront hooligans” that was launched this year.

Teacher shot to death while driving with his children