After 21 one days on strike, 600 workers of Ahwaz city train construction project are still refusing to work, and management has fired 60 of the non-local workers from the tunnel-boring section. 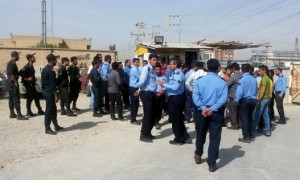 Six days ago, the company terminated another 60 of the tunnel-boring operators, and on Sunday May 17, workers from other sections of the project resumed their strike in protest.

Workers on the train construction project in Ahwaz, which is being run by the Kison Company, have not been paid for four months.

This is the fifth time in four years that workers on the project have gone on strike to protest that wages have gone unpaid for anywhere between four and six months.

The company has periodically terminated groups of employees that have been more vocal in fighting for workers’ rights.