Iran`s Supreme Leader has referred to the Saudi attacks on Yemen, saying: “We are all neighbours. Security in the Persian Gulf is in everyone’s interest. If it is secure, we will reap the benefits; if it is insecure, it will cause insecurity for everyone.” 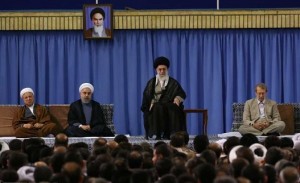 The Iranian leader gave a speech on Saturday May 16 in the presence of a number of Iranian officials and ambassadors from Muslim countries, denouncing the U.S. presence in the Persian Gulf and insisting the security of the Persian Gulf is the responsibility of the gulf states, adding: “The U.S. is looking out for its own interests and if necessary will create insecurity in the region”.

He added that “the cause of insecurity and massacre in Yemen is unfortunately those countries claiming to be Muslim but they are beguiled, and the chief supporter and designer of terrorism is the United States.”

The Iranian leader went on to say that the people of Yemen, Bahrain and Palestine are “being oppressed” and that “we will support the oppressed as much as we can”.