On Thursday May 14, teachers in Kurdistan province gathered in silence for the fourth time to protest “unfair wages and discrimination in the Ministry of Education”. 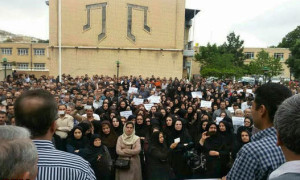 ILNA reports that the gathering occurred in Sanandaj in front of the Kurdistan governor’s office.

The protesters carried no banners or placards, as teachers believe that their demands are very clear and their employment terms and conditions are clearly inadequate.
They add that the ministry merely provides promises and that the promises do not solve their problems.

Teachers also gathered in silence last Thursday in several cities across the country. Similar protests were held in March and April.

Reports indicate that Sanandaj authorities engaged in negotiations with the teachers on Thursday; however, no reports have been published regarding the substance of the talks.

The repeated teacher protests have led to the arrest of a number of labour activists advocating for teachers rights.