The Saudi-led coalition’s attack on an ammunition depot near Sanaa killed 69 people on Tuesday March 12. 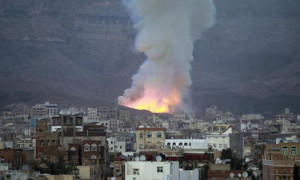 Yemeni health officials told AFP that the attack was carried out on the outskirts of the capital. They added that most of the dead are civilians and 250 others were wounded in the attack.

Another five people were killed on Monday in a separate attack on the depot.

Saudi Arabia had previously announced, at a meeting with U.S. Secretary of State John Kerry, that it agreed to a five-day ceasefire to allow for humanitarian aid to be provided to Yemeni civilians.

The ceasefire is set to start on the evening of May 12.

The Saudi-led coalition forces have been bombing Yemen since March 26 to stop the advance of the Houthis, who have taken control of large parts of the country.