150 miners at Negin Mine in Tabas went on strike on Monday May 11 to protest that they are owed one and a half months’ pay. 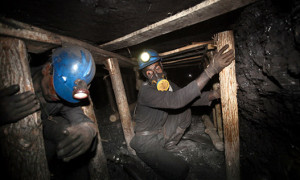 ILNA reports that the miners had originally gone three months with no pay. Then the company came up with only half of what it owes them.

The mine has 400 workers who work six dayshifts and get paid for three of them. Monday’s protesters were the 150 scheduled to being the six-day work week on that day.

The workers told ILNA they have made several attempts to resolve their problems by speaking to management but with no success.

The workers are also calling for improvements to their working conditions. In March, an incident at the Qom Manganese Mine killed two workers.

In April, five workers at the Chadormalo Mine in Yazd were sentenced to imprisonment and flogging on charges of disturbing the order for trying to organize worker protests.