Houthi fighters in Yemen have announced that they are prepared to engage in negotiations with the coalition forces bombing their country in order to end the plight of their people. 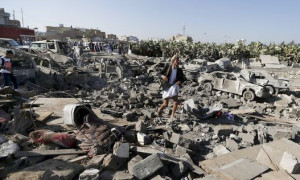 In a statement issued on Sunday May 10, they also called for more humanitarian aid for the people of Yemen.

Reuters reports that in their statement, the Houthis agree to hold talks with the coalition forces under the umbrella of the UN.

Saudi Arabia had announced that if the Houthis accept a ceasefire, they will stop air strikes on Tuesday for five days.

Reports indicate that the Yemeni capital of Sanaa is surrounded by a cloud of dust from the continued Saudi attacks.

White tiger from Germany to be displayed in Tehran zoo

Suspects in shooting of students in Saravan arrested