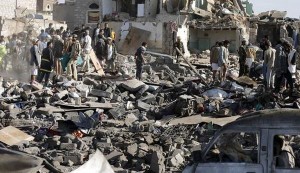 Reuters reported on Saturday May 9 that Johannes van der Klaauw said in a statement: “The indiscriminate bombing of populated areas, with or without prior warning, is in contravention of international humanitarian law.”
The latest wave of aerial attacks on Saada has trapped many civilians as a fuel shortage cuts off transportation.

The Saudi-led coalition confirmed on May 9 that it had made 130 air strikes over the past 24 hours, adding that it had called on civilians to evacuate Saada before commencing the attack.

The senior UN official said many of the Saudi attacks were in violation of international law.