Dust particles again filled the skies of Ahwaz and gusty winds once again threw the city into crisis on Thursday May 7. 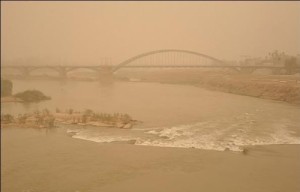 The Tasnim News Agency reports that visibility is very low today in Ahwaz, wreaking havoc on traffic in the city.
The skies have reportedly turned severely dark and precipitation has compounded the problems.

Reports indicate that in addition to Ahwaz, some of the northern cities in Khuzestan province in Western Iran are also experiencing similar conditions.

On Tuesday, the head of Iran’s Department of the Environment said the public has to come to terms with the problem of dust particles because it is not something that can be resolved in the near future.

Climate change in northern Africa and Western Asia as well as reduced precipitation, higher average temperatures, war and conflict and inappropriate water consumption models were among the causes of the repeated dust storms listed by Massoumeh Ebtekar.