The Italian Navy announced on Monday May 4th that it had rescued 6,800 asylum seekers off the coast of Libya in the past two days. 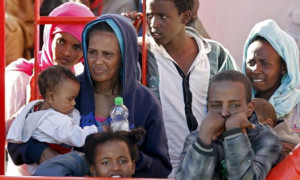 Reuters reports that in recent days at least 34 boats carrying refugees have reached safety, including one that carried a pregnant woman who delivered her child, and they are both reported to be in good health.

Good weather and calm seas have increased the number of asylum seekers braving the seas in search of safety.

In recent weeks, several boats carrying asylum seekers to Europe met with fatal accidents in the Mediterranean. The UNHCR has reported that since the beginning of the current year, 1,800 people have been drowned at sea in such incidents.
In the last two days, the French the navy assisted in rescuing asylum seekers for the first time.

Protesters try to block moderate cleric from speaking at university