Rohani calls for unity across Iran in speech in Shiraz 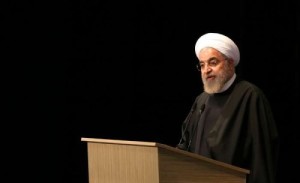 The Iranian president struck a conciliatory note on Wednesday April 29 when he spoke to a group in Shiraz identified as “scholars, veterans and the elite of the Fars Province”, urging different factions to unite in an effort to improve the country on all fronts.

“Let us truly reconcile with each other; work for unity and integrity; allow calmness to take hold and put all our efforts into overcoming our shortcomings,” he said.

The Rohani administration has been attacked by many hardliners in the Islamic Republic for its reformist stance on politics and foreign policy. Its efforts to reach a nuclear agreement with the world powers, although cautiously supported by the Supreme Leader, are still subject to serious criticism by many conservative figures and groups.

Recently, the outspoken MP Ali Motahari was violently attacked by a mob when he arrived in Shiraz to give a speech at Shiraz University. He was prevented from giving his speech. Motahari has accused senior clergy members in Shiraz of sanctioning the attack.

Rohani called for tolerance and an open atmosphere where everyone can express his or her opinions.