Iran’s Supreme Leader said in a speech in anticipation of International Workers Day in Tehran that the “key to the economic problems is not in Lausanne, Geneva or New York but it is tied to the strengthening of domestic production”. 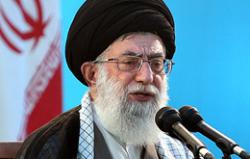 The Iranian leader’s mention of Lausanne, Geneva and New York was a reference to the ongoing nuclear negotiations between Iran and the world powers, in which the Rohani administration is trying hard to remove international sanctions on the country.

In a speech on April 29 to a group of Iranian workers, Ayatollah Khamenei said: “We do not deny the effect of unjust sanctions against the people of Iran but we do not believe that sanctions can thwart a systematic effort to raise domestic production.”

“If economic problems are to be solved, there must a concentrated effort on the issue of domestic production,” the Iranian leader said.
He said the government should set an example by shunning foreign suppliers in favour of domestic sources when possible.

He also made reference to recent statements about corruption and said government officials need to go beyond mere whistleblowing and should begin taking effective action to uproot corruption.

Labour activists detained in run-up to May Day