IRGC makes arrests in Shiraz at time of Rohani visit

Four members of the president’s Welcoming Committee in Shiraz were briefly arrested as Iranian President Hassan Rohani arrived in the city, which recently made news for the attack on outspoken MP Ali Motahari orchestrated by conservative factions. 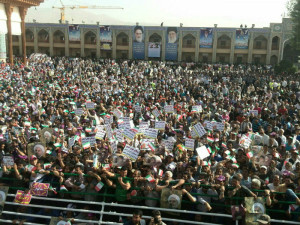 The group had reportedly been engaged in setting up stalls across the city to inform the public about Reformists and the president’s policies.

The report indicates that the four were arrested by the Revolutionary Guards intelligence office and later released on Wednesday morning. There has been no report on the reason for their arrest.

Conservative factions in various parts of the city have been trying to stop reformists from creating any form of public platform for themselves in preparation for the parliamentary elections next March.