Iranian President Hassan Rohani says conditions for production and manufacturing will improve when an agreement is reached with the world powers and he warned “sanctions go-betweens” to begin looking for another kind of livelihood. 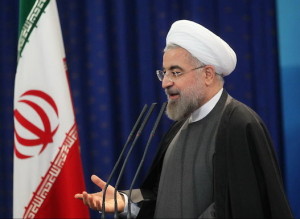 According to a report on Tasnim News, Rohani stressed that the sanctions regime is “on the verge of complete collapse and within a few months no one will be able to pressure or sanction Iran in any way.”

He added that his government does not see the resolution of the nuclear dispute as an end but just the beginning of dealing with the problems faced by the country.

“We are pursuing two matters: first, to clear the unfounded allegations and lies the world has been told about us, and then, to remove all sanctions and the problems associated with them,” Rohani said.

Iran’s Supreme Leader has said that the implementation of an agreement with the world powers should coincide with the immediate removal of all sanctions and he has rejected proposals for their staggered removal.