Iranian foreign minister Mohammad Javad Zarif spoke on behalf of the 120-nation Non-aligned Movement at the NPT meeting on Monday April 27 demanding that the five states that have nuclear weapons scrap plans to modernize or extend the life of their nuclear weapons. 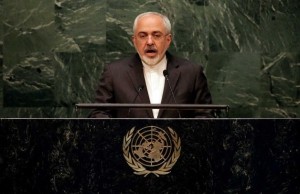 Zarif specifically referred to Israel and its nuclear stockpile as a threat to the region.

Zarif said: “We call upon the nuclear-weapon states to immediately cease their plans to further invest in modernizing and extending the life span of their nuclear weapons and related facilities.”

Zarif went on to stress on the “inalienable right of all the parties to the Treaty to develop research, production and use of nuclear energy for peaceful purposes without discrimination and in conformity with Articles I and II of the Treaty.”

Zarif has led Iranian delegation in negotiations with the 5+1 over Iran’s nuclear activities for the past year and a half and the parties have indicated that they have reached a tentative deal and are now engaged in drafting the details of the agreement which will be finalized by June 30.

Zarif called for “clear time-bound undertakings by the nuclear weapon States to eliminate all their nuclear weapons” which he maintained was the only way to “rid the world of these inhumane weapons and to bring a safer world for our children.”