Police to crack down on luxury vehicles after Leader’s comments

After the Iranian Supreme Leader criticized the prevalence of luxury cars in the streets, traffic police officials have announced that they are prepared to deal with possible violations by such vehicles. 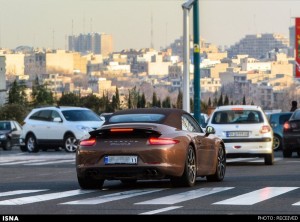 ISNA reports that Colonel Parviz Vaziri of the Tehran Traffic Police says officers will be on the lookout for luxury cars speeding on city streets. He said the police have orders to confiscate these vehicles if their drivers are caught exceeding speed limits.

On Sunday, Ayatollah Khamenei told a meeting of the police force: “Some youngsters, drunk with the vanity of wealth, are flaunting their luxury cars on the streets and creating insecurity.”

He added that the country’s security forces should have plans against the various forms of violations that threaten security.

Last week, five people were killed on the Hemmat Highway in an accident involving a speeding Porsche. The news got widespread pick-up in social media and Iranian media.
The police have now announced that officers will be on a special lookout for traffic violations by such cars.