A car carrying 14 Afghan refugees was involved in an accident on Rostamabad-Bam Road, killing nine passengers and the Iranian driver. 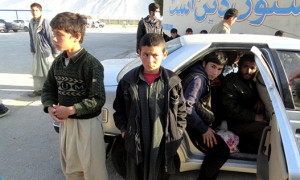 Five refugees who were in the trunk have been transferred to hospital with serious burn injuries.

IRNA reports that police say the accident occurred at 4 AM on Friday April 18. Nine passengers and the driver were burned after the car clouded with a truck head on. The Peugeot carrying the refugees did not have its headlights on.

The accident is said to have occurred due to a lack of attention to the road, high speed and the unwillingness to use the headlights.

The police chief reports that in the region, the transportation of Afghan refugees who have no status papers in Iran often happens in such a manner, with overcrowded cars and dangerous driving practices.

Iranian officials estimate that up to three million Afghans live in Iran and close to half of them are undocumented.