Thousands of Iranian teachers gathered in silence in dozens of cities across the country in front of the ministry of education and governor’s buildings on Thursday April 15. 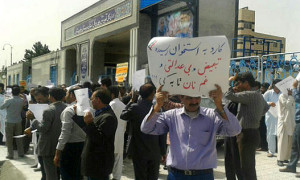 ILNA reports that among dozens of other cities, Tehran saw more than 1,000 teachers gather in front of the ministry of education and more than 300 in front of Parliament.

The teachers want enough of a wage increase to make their pay commensurate with that of other public employees.
The placards carried by protesters condemned “wage discrimination against teachers” by the government.

Some reports indicate that in Rasht, the teachers’ gathering was met with some aggression from security forces.
Teachers have been persistent in their continued protests for better wages and benefits.