A boat carrying asylum seekers from Libya to Europe capsized, leading to the death of 400 people. The Italian coastguard managed to save 144 of the passengers. 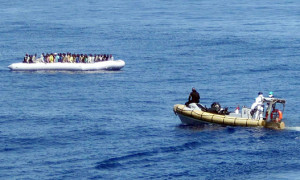 When the Italians reached the boat, 80 miles off the coast of Libya, most of the passengers had already drowned.

The Italian coastguard said it has recovered some of the bodies but some are still missing. The report adds that despite the use of search planes, there is little hope of rescuing any more of the passengers.

The International Immigration Organization reports that the boat was carrying 550 people and Save the Children reports that most of the drowned are children.

In October of 2013, another boat carrying asylum seekers from Africa to Europe capsized near Italy and 360 passengers were drowned.

There has been an increase in similar accidents in recent days and 8,500 asylum seekers have been rescued since last Friday.

Italy is seeing a surge in asylum seekers. On Tuesday, 1,200 refugees landed in Palermo, Sicily.