Iranian teachers’ protests have become more widespread in recent months and the latest protests in Bushehr saw more than 200 teachers gathering on Monday April 13 for the third consecutive day in front of the Ministry of Education. 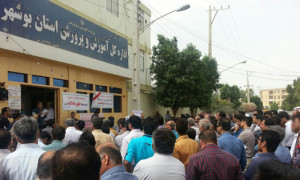 ILNA reports that teachers want increased wages and benefits. They are calling for pay equity with other government employees.

Similar protests have also occurred in other cities in Bushehr Province including Berazjan and Tangestan.

On Sunday April 12, hundreds of teachers gathered in protest in front of the Khuzestan Ministry of Education, making similar demands.

Teachers also gathered in protest in Andimeshk, and Alvar in Khuzestan province.

The teachers are organizing through social media to consolidate protests across the country and demand at least as much pay as other government employees.

Teachers are concerned that the education ministry budget will not provide for an adequate wage increase.