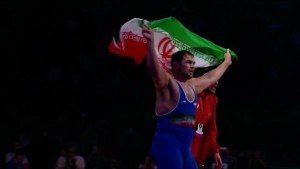 The 43rd round of championships was held in Los Angeles and reached the finals on Sunday.

Defeating Belorussia and Turkey, Iran then met Azerbaijan, which it managed to defeat 10 to 7.

The Azerbaijan team managed to take the third position after defeating Russia.

The United States has hosted most of the wrestling championships since the began, with the Soviet Union/Russia, the United States and Iran tending to dominate the top spots.