Iranian President Hassan Rohani says Iran will not sign any deal unless it entails the lifting of all sanctions from the day the agreement is executed. 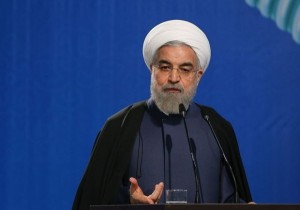 President Rohani, who was speaking at a gathering on Thursday April 9 to mark Nuclear Technology Day in Iran, said Iran has never been after nuclear weapons and its nuclear ambitions have always been peaceful.

On April 2, 2015, the negotiating parties in Lausanne made an announcement after eight days of marathon talks, saying they had agreed on a framework. The Iranian party reported that the framework called for the complete elimination of sanctions at the time of the execution of the agreement on June 30, but U.S. officials have expressed reservations about completely lifting the sanctions all at once and have suggested a plan for more gradual action.

Rohani said the world powers have realized that Iran will not bow to force and pressure but will return in kind the language of respect and rationality.

Meanwhile, Iran’s Supreme Leader spoke for the first time since the nuclear consensus in Lausanne was announced on April 2, saying it is too early to take any stance regarding the outcome of the negotiations.

The Iranian nuclear negotiators returned home to widespread celebrations by the people and have been congratulated by several top Islamic Republic figures, including the head of the Revolutionary Guards Mohammad Ali Jafari, for their achievements in the negotiations so far.

Ayatollah Khamenei said today that “extending congratulations at this point is meaningless”.

The negotiating parties have set a June 30 deadline to reach a final comprehensive agreement.